For starters, remember these important things:

We will also assume that the pattern must be continuous, with no large discontinuities in the basal rate data structure from one point of time to the next. To keep it this way, we cannot just adjust one part of the curve, or we may accidentally create a discontinuity. So we will modify the basal rate values via weight factors (center weighted) for blending of new values with old.

The basal rate as an adaptive variableEdit

Let's take the general figure from the Adaptive Variables, Adaptive Filtering article and use it as a template for the basal rate description. 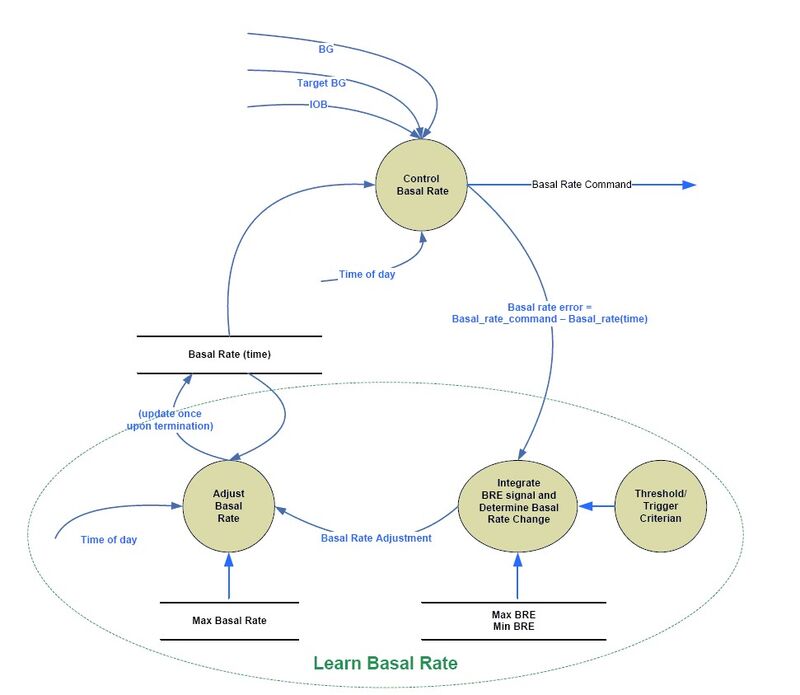 So, let's walk through the figure and discuss how it works. First let's consider the "control basal rate" functionality. This will be described in detail later, but for now let's just say that we will make an error signal from the actual BG measured from the CGMS and our target value for BG. The error signal will be calculated as actual-minus-target, such that a positive error signal indicates that the BG value is above target and needs therefore to increase the insulin delivered. We will need some signal processing to avoid sudden changes in the basal rate command, but in general the basal rate command will be increased proportionately to the integral of the error signal. When we have the opportunity between boluses to control the basal rate with CGMS data, we can increase the basal rate actually delivered to fill the gap between the insulin needed to balance and hold BG steady relative to the insulin rate predicted. The function will of course work in both directions, and will deny insulin to balance when required.

The software capability to "learn the basal rate" will be broken down into sub-functions. The first function is to perform integration of the error signal and calculate the magnitude of the resulting change to the basal rate, if any. The integration function will give us a number combining both the magnitude and duration of the error signal over the entire exposure event in this state. When we are done monitoring how far off the prediction actually was, we can then change the basal rate values (only once) so they can be used next time.

We don't want the algorithm to change the basal rate unless the change it needs is large enough to warrant doing so. The process "Determine trigger/threshold criterion" will control this. We also want the rate-of-change of the adaption to be controlled (one large mistake should not cause a big change to the basal rate) so the maximum and minimum values for the basal rate change will be enforced. We also don't want the final basal rate be larger than a maximum value either, and that will be enforced by the process that updates the basal rate. While enforced by the software, all of these max and min control limits will be made by an external PC that a CDE or test engineer can set up manually.

The process "Update basal rate" will actually change some of the values in memory for the basal rate pattern. It will only change it once, and only when other applications are ready to do so. This process will change the basal rate value for 6 hours (or more or less depending on what future modeling and experience will tell us) with a weight factor for each hour. We know we need to change the basal rate an hour before we want it to have impact to the blood glucose level, and we want to "blend" in the changes with the baseline curve to avoid a discontinuity. So the weight factors for updating the basal rate pattern, with one weight factor for each one-hour data point in the pattern, will be something like: {5%, 10%, 15%, 15%, 10%, 5%} where the 15% value is one hour before the actual BG levels were high enough to mandate a change to the pattern.

For example, suppose the basal rate at 4 am was proving to be too high by CGMS values below target and trending down. It was set with one hour increments starting at 1 am with these values: 0.9, 0.85, 0.85, 0.9, 0.9, and 0.85 units of insulin per hour respectively. The CGMS sees low blood sugars at 4 am, for which the artificial pancreas algorithm reduces the basal rate to zero for 1.5 hours and then to 0.75 for the next two hours before going back to 1.0. This change takes 2 units of insulin out of the basal insulin profile over that time period. The adaptive algorithm will want to take about 1/3 (again to be determined later with more experience with the algorithm) of that out of the basal rate, or 0.6 units for tomorrow at the same time. Over a 6 hour period, this would have the following impact to the basal rate pattern stored in memory to use in the future: 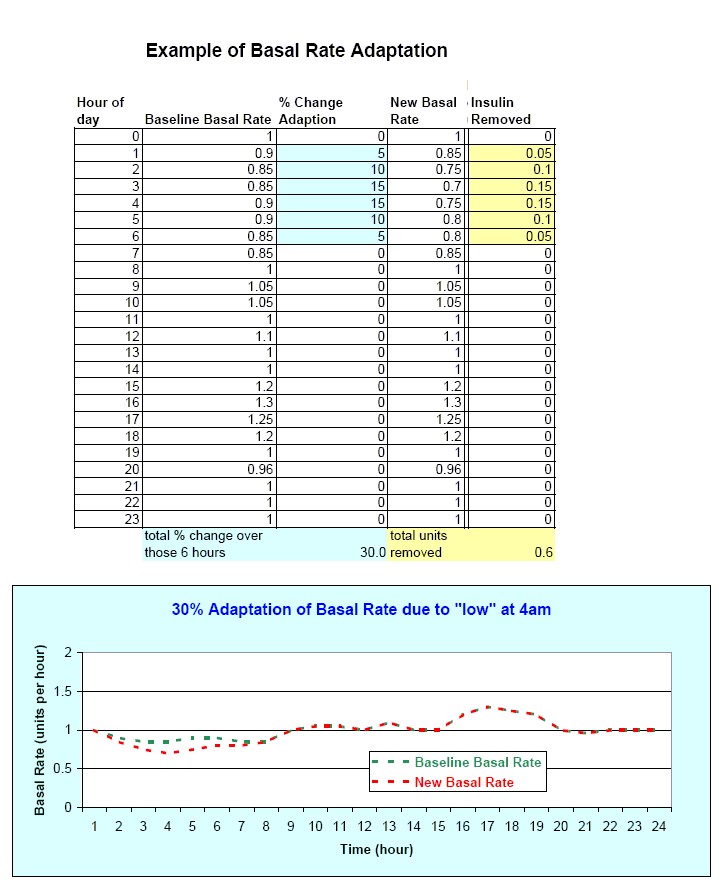 Note that one "low" event did not completely drive the new basal rate to its corresponding lower rate. If so, that would have taken 2 units insulin out of the basal rate over those 6 hours. Instead, by learning slowly, it will take a few low events over a few days, or a pattern of intermittent lows over several days, to drive the basal rate fully down to its new pattern. The basal rate function learns and adapts gracefully, not all at once. Remember, the process that actually controls the instantaneous basal rate dialed it all the way down right away, as needed for each "low" event for each one that occurred: it is only the learning of the new basal rate that takes several days to catch up to the best basal rate for future use.

This learning and adaption can happen to different parts of the algorithm all day long. At night (when our pump user is not bolusing) it will happen more often. During the day, our pump user may have to skip meals sometimes to keep the executive state machine in the "Control basal rate with CGMS feedback" mode to learn the basal rate for that part of the day. Also remember, our pump user (or the CDE) can still hook-up to a computer and set the basal rate to any values that are needed.

Retrieved from "https://abetterpancreas.fandom.com/wiki/Example:_how_will_the_algorithm_%22Learn%22_the_basal_rate%3F?oldid=3625"
Community content is available under CC-BY-SA unless otherwise noted.