So, what variables of the insulin pump need to be controlled? Which will be available to be "learned?"

Insulin pumps have been developed to compliment the teachings of endocrinologists and certified diabetes educators based on the concepts of intensive insulinotherapy (sometimes called flexible insulin therapy). This involves a flexible approach to regulating multiple doses of insulin per day, based on multiple blood glucose tests per day, and adjusting the dose based on foods about to be eaten, exercise or activities planned for the next few hours, and to correct for a deviation of the actual blood sugar right now.

This falls into 3 basic components of the insulin regimen:

A formula often taught to diabetic children to calculate their insulin requirement before a meal is:

Here are the key variables in the algorithm, and their definitions: 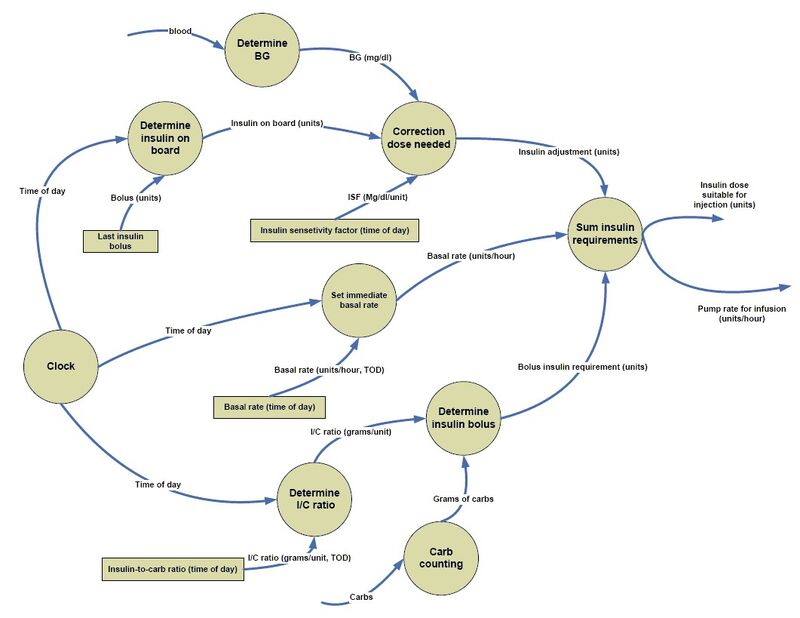 Basal insulin is dosed in units needed for a 24 hour period. Often this accounts for half of the total daily insulin requirement, depending on the person and their daily activities. It can be one injection per day, but is sometimes broken down into two injections per day. Lantus for example might be dosed as one injection of 24 units, which is relative to 2 injections of Levimur at 12 units each, and related to a continuous dose of 1 unit per hour. Each has the same total dose per 24 hour period.

Not surprisingly, the insulin pump and its model for continuous subcutaneous insulin infusion matches closely the same principals used in intensive insulinotherapy. It's primary difference is in the replacement of long lasting basal insulin with a continuous push of short-acting insulin. In fact, the insulin pump delivers one choice of insulin (the user makes the choice) for both basal and bolus needs. The insulin profiles (action over time) of the long acting insulin are not ideal. Ideal is defined here as a "flat" or peakless profile of insulin release over time. Ideal may not necessarily match the needs of a single insulin user, but it gives a stable baseline for which individual insuln users can customize for their particular needs. The problem, well known of course, is that n one of the long lasting insulins are really peakless. While Lantus and Levimur profiles are a leap ahead over the older NPH strong peak profile, and while they are very usable right now, the long lasting insulins are still not ideal. Enter the insulin pump. Compared to the long acting insulins, the continuous infusion of fast-acting insulin for basal needs offers these benefits:

The same features that make for a good fit of basal insulin also benefit the pump user for all insulin needs:

Therefore, the algorithm for interfacing with the insulin pump is the same as with intensive insulinotherapy, but utilizes a basal rate of fact-acting insulin. The key parameters, as shown in the "data store" boxes in the diagram above, are all needed to control the insulin pump and can be "learned" by the insulin pump with the use of adaptive variables.

Retrieved from "https://abetterpancreas.fandom.com/wiki/Insulin_pump_control_variables?oldid=3616"
Community content is available under CC-BY-SA unless otherwise noted.